Thank you and congratulations Best Footers! 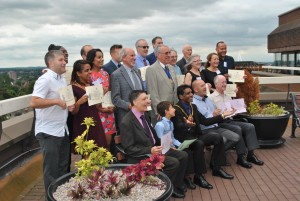 The Mayor, Cllr Elias Mattu and Club President Paul Lockley, flanked by a cohort of Centurions.

The Rotary Club of Wolverhampton thanks the Patrons, who provided the funds, and the walkers and runners,whose laps of the Stadium released those funds for the charities.

The results for this year’s event can be found below.